For the pasta, you need:
1 bowl of semolina
2 bowls of plain flour
1/2 tsp salt
Water to bind it all into a firm dough
1 tbsp olive oil (optional)
Extra flour and olive oil
Pasta maker and rolling pin
Couscousier or steamer
Butter
Mix the dry ingredients and add lukewarm water (1 part hot, two parts cold) little by little to bind the ingredients together. Knead into a firm, but soft dough.
Divide into small balls, set aside and cover for ten minutes.
Roll out to strips on a floured surface. Pass one strip at a time through the pasta maker on 2 mm setting twice, then two settings thinner twice and then another two settings thinner. If the pasta feels sticky, powder it with flour, the more the better. On my pasta maker I had to use setting number 2 first, then number 4 and then number 6, some pasta makers have their settings ranging the opposite direction and so you have to start with number 4, going down to 2 and 1.
After this the pasta is fed through the cutting wheels, with the smallest cut. Catch the noodles as they come out and transfer to a floured surface and divide them. You can let them dry for a little while, but it's not necessary. 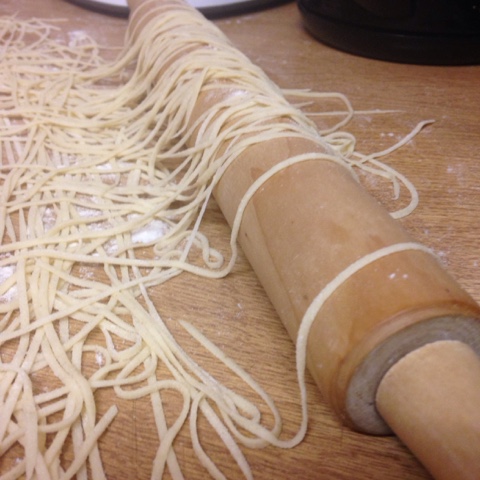 Bring some water up to a boil in the couscousier pot and then drop the temperature to a simmer. Coat the upper part of the couscousier with oil. Drizzle some oil over the pasta noodles, mix and immediately lay it in the steamer over the simmering water. Cover and steam for ten minutes. For best results, work in small batches, for beginners that's one tiny ball at a time. 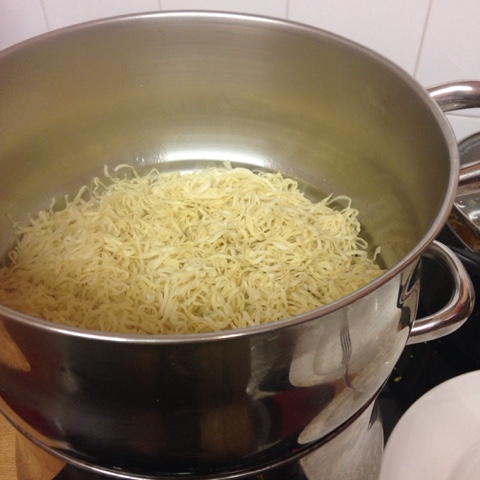 After the ten minutes are up, lift the rishta out of the steamer and place then in a plate or tray. Don't mix different batches until they've cooled down.
At this stage the rishta can be put in a bag and into the freezer for a later date.
Once all is done, take the amount you want and steam another five minutes on low heat without cover. Lift over to a plate, add a knob of butter and mix.
Serve with rishta stew. 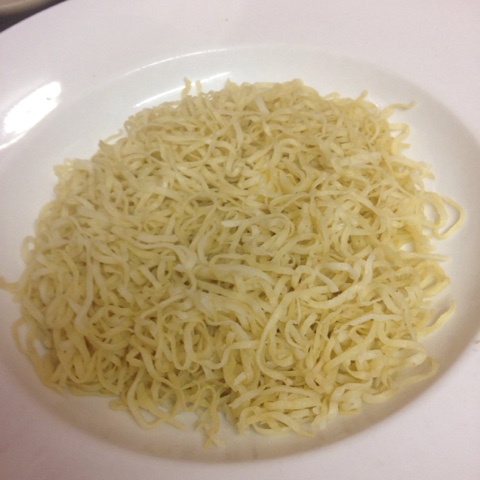 For the stew or sauce:
Olive oil
One chopped onion
One whole chicken skinned and cut up
Salt, pepper (I use white) and cinnamon
Boiling water to cover
Chick peas
A couple of potatoes cut into chunks
One large, cut mooli
Three medium sized, cut carrots (optional - I like some colour)
Lightly fry the onion until it's lost colour, add the chicken and spices. Fry until the chicken has taken some colour.
Add hot water and vegetables. Bring to a boil and lower the heat to a simmer. Cook for 40 minutes to an hour or until it is cooked through.
Posted by Oum Anas at 09:39 No comments: 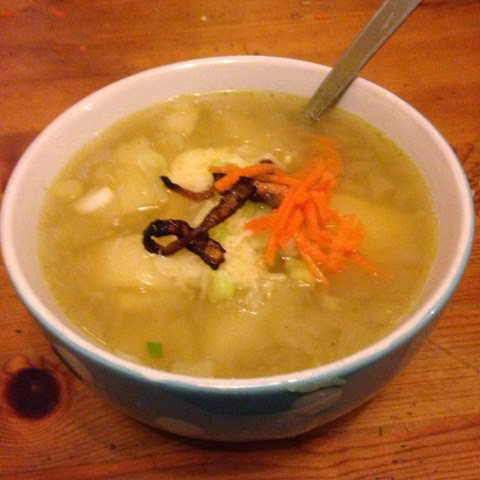 2 tbsp olive oil (or preferred frying fat)
6 medium sized onions, peeled and chopped
6 medium sized potatoes, peeled and cut into cubes
1 1/2 litre vegetable stock (2-3 cubes)
Salt to taste
Grated cheddar cheese
Fry the onion until soft or golden. Add potatoes and stock. Bring to the boil, lower the heat and let simmer for approximately 30-40 minutes or until the potatoes are cooked through. Add salt if needed. Serve with grated cheese on top and with some nice bread (eg crisp bread with butter and cheese or grated carrot).
Posted by Oum Anas at 22:00 No comments: 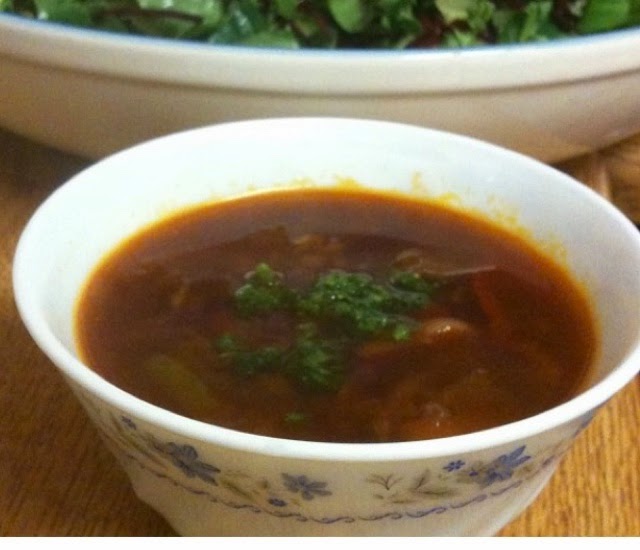 Schorbah, the way I do it:
500g meat (optional, I mostly make all my soups vegetarian nowadays)
1-2 diced onion(s)
1-2 stalk(s) celery
Water
2-3 tomatoes (and/or 2 tbsp tomato paste/purée)
1-2 carrots
1 courgette
1 can chick peas
Salt, pepper, cinnamon, paprika, ra's-el-hanout (optional), ground coriander seed (I use eye measurements, so not sure how much I use of the spices, somewhere between 1 tsp and 1 tbsp)
A handful or two of vermicelli
Fresh coriander
Fresh parsley
Fresh mint
Lemon for serving
Fry onion and celery in oil until soft (add meat)
If using fresh tomatoes, skin them and then dice or blend in food processor. Add into the pot. Let cool for awhile, adding spices. Add vegetables (grated or finely cut/chopped) and water to cover. Add chick peas, bring to the boil and simmer for about forty minutes (one hour or more if using meat), or until cooked. Add vermicelli and simmer for ten minutes.
Add the fresh, chopped herbs and serve with lemon.
Posted by Oum Anas at 12:10 No comments:

Experimenting with how much (or little) vinegar that can be used in making soft cheese, I realised that it's not so much a matter of the amount of acid, but rather the heat of the milk.

If the cheese won't curdle, don't add more acid, but increase the heat by turning it on again, just make sure it doesn't boil, and "voila!" it'll curdle just fine :) 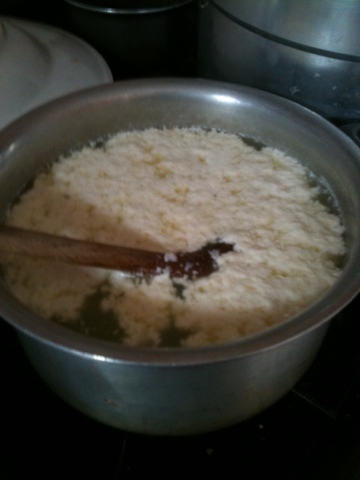 I made it with one litre of milk, brought it to a simmer (not a rolling boil as in the recipe) and my tiny lemons were not enough to separate the curds and whey, so had to take one and a half (the first one was 2.5 tbs, so say maybe 3.5 tbs lemon juice for a litre of milk). 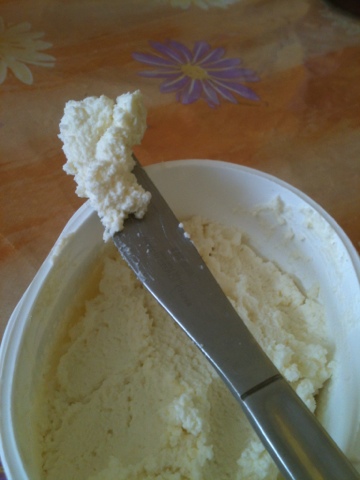 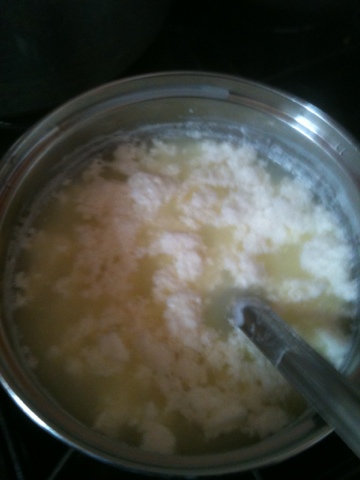 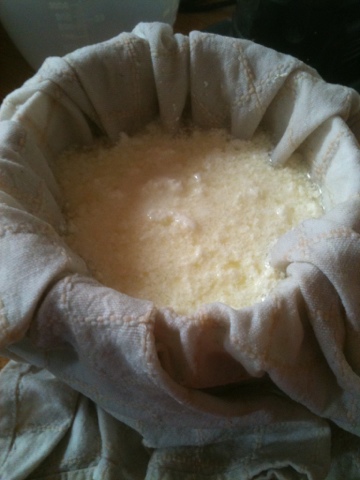 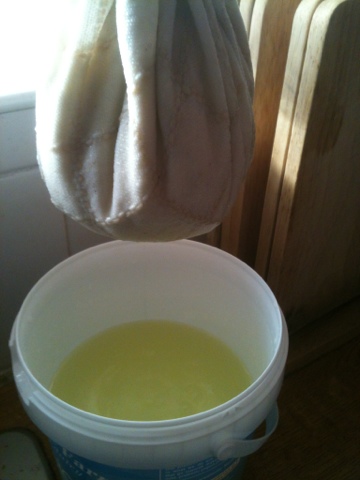 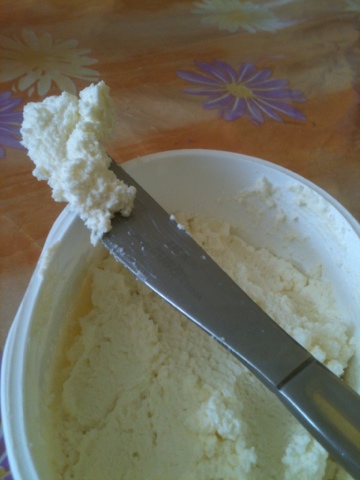